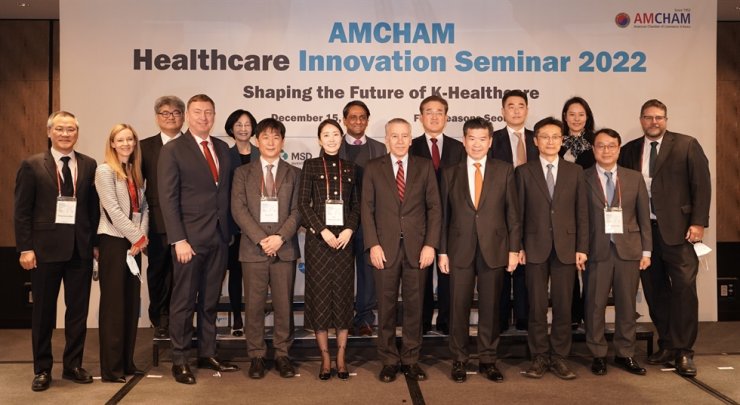 By Park Jae-hyuk, The Korea Times - The American Chamber of Commerce in Korea (AMCHAM) hosted the 13th AMCHAM Healthcare Innovation Seminar, Thursday, discussing ways for Korea to become a global healthcare innovation hub by taking advantage of its partnership with the U.S.

"Today's seminar will explore how new technology is influencing healthcare, and how this changes Korea's path to becoming a healthcare innovation hub," AMCHAM Chairman James Kim said in his opening remarks. "Now is the perfect opportunity for Korea to take the global leadership position in integrating this into our healthcare with K-healthcare."

The event was held amid lingering concerns among Korea's healthcare industry officials over U.S. President Joe Biden's executive order on the National Biotechnology and Biomanufacturing Initiative (NBBI) signed in September as part of efforts to protect American manufacturers.

The executive order is intended to induce pharmaceutical firms to conduct R&D and production in the U.S. by providing benefits. Although it has been interpreted widely as an attempt to restrain the growth of China's biotech industry, Korean pharmaceutical firms have accelerated their efforts to build manufacturing plants in the U.S. and to acquire American biotech companies.

"I am excited about the direction of the U.S.-Korea comprehensive economic partnership and our global alliance," he said. "We can only be successful if governments, companies and individuals work together to achieve common goals."

The U.S. envoy, however, did not address Korea's concerns over the NBBI.

When Second Vice Minister of Foreign Affairs Lee Do-hoon visited Washington, D.C., earlier this week, he expressed concerns about the NBBI to Under Secretary of State for Economic Growth, Energy, and the Environment Jose Fernandez, according to the foreign ministry.

The ministry told reporters that Lee's U.S. counterpart said that the executive order is not intended to discriminate against foreign manufacturers or exclude foreign partners.

"Fernandez said the U.S. government is drawing up plans for international cooperation and will collect opinions from the Korean government and industry officials on the executive order," a foreign ministry official said.