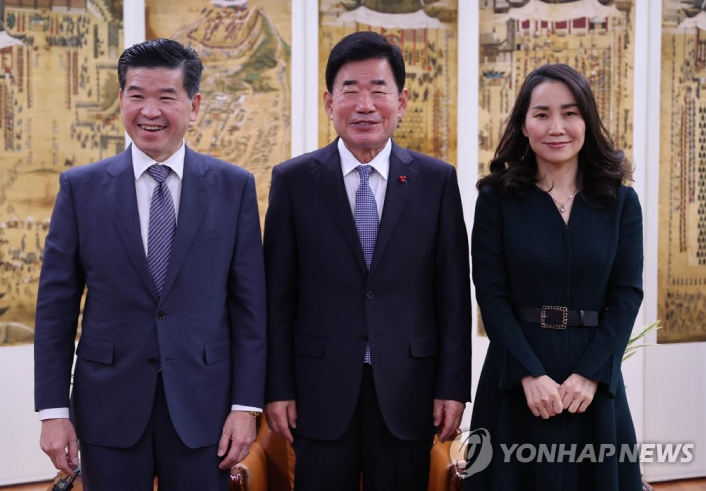 SEOUL, Dec. 12 (Yonhap) - National Assembly Speaker Kim Jin-pyo expressed concerns over the U.S. Inflation Reduction Act (IRA) that is feared to hurt South Korean automakers during his meeting with the leaders of the U.S. and German business lobbies here Monday.

During the meeting with James Kim, Chairman & CEO of the American Chamber of Commerce in Korea (AMCHAM), and Park Hyun-nam, Chair of the Korean-German Chamber of Commerce and Industry, Kim stressed the need for an "exceptional clause" for countries that have entered a free trade agreement with the U.S. in implementing the IRA.

The IRA, signed into law by U.S. President Joe Biden in August, gives up to US$7,500 in tax credits to buyers of electric vehicles assembled only in North America, sparking concerns that Hyundai Motor and Kia Corp. could lose ground the U.S. market. The two South Korean carmakers assemble their EVs at domestic plants for export to the U.S.

"Large-scale investments that were made as a promise to U.S. President Biden during the South Korea-U.S. summit may be delayed should shares of Hyundai Motor and major Korean firms tumble due to them not receiving tax credits," Kim said. "A clause that acknowledges exceptions for countries that have entered a free trade agreement with the U.S. is necessary," he added.

The speaker also thanked them for contributing to expanding trade and investment between Korea and the two countries, and requested they act as bridges for economic cooperation.

In turn, AMCHAM Chairman Kim noted there is growing demand by foreign companies to establish regional hubs in South Korea amid China's zero-tolerance policy on COVID-19 and political issues in Hong Kong, calling it a time of opportunity.

Park agreed with Kim and offered advice that South Korea should make the most of this opportunity, which would likely bring not only regional hubs but financial institutions, and arts and culture sectors to the country as well. (Yonhap)