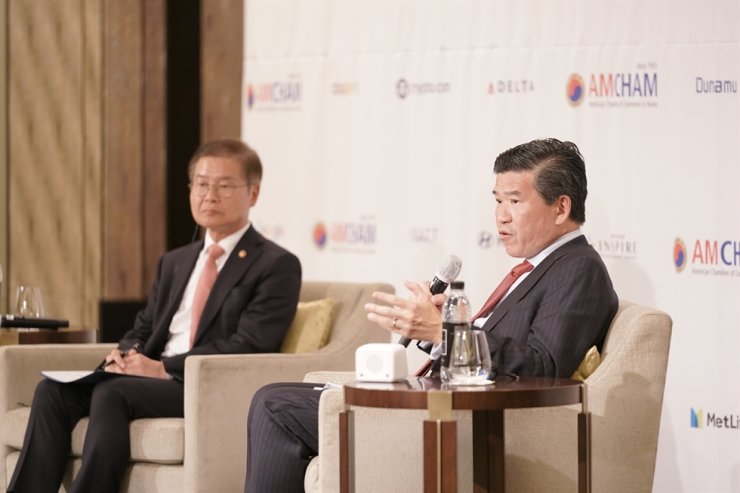 By Park Jae-hyuk, The Korea Times - U.S. businesspeople in Korea received a lukewarm answer from the labor minister of the business-friendly Yoon Suk-yeol administration, in response to their requests to ease the Serious Accidents Punishment Act (SAPA), which can send a company's CEO to jail if a fatal industrial accident occurs at the company's workplace.

During Tuesday's luncheon meeting between Minister of Employment and Labor Lee Jung-sik and members of the American Chamber of Commerce in Korea (AMCHAM), the minister emphasized that it is too early to talk about revising the law, which took effect just nine months ago.

"The SAPA is intended mainly to prevent frequent industrial accidents in Korea, rather than to punish CEOs," he said. "CEOs do not need to worry about this law if they fulfill their duty to check safety measures."

Although AMCHAM Chairman James Kim told the minister that many U.S. businesspeople regard the Korean law as a "very unique regulation," Lee said that the government is only able to revise the enforcement decree within the minimum necessary level.

"We will try to make our labor policies meet global standards, but Korea has had the world's worst level of fatal industrial accidents," Lee said. "The country has become one of the largest economies among the OECD countries, but it is still the 'republic of industrial accidents.'"

In response to a question about easing the requirement for the 52-hour workweek, the minister noted that Korea has also has the longest working hours among the OECD members, although he added that the government has been seeking to allow some scheduling flexibility.

Regarding a question on the possibility of differentiating minimum wages by industries, Lee said that labor and management may discuss this issue early next year, once a labor policy research institute finishes collecting data related to minimum wages.

He also said that the government is not allowed to force businesses to replace their seniority-based wage system with a performance-based payment system, as it basically depends on agreements between labor and management. "A balanced approach is necessary for labor policies," the minister said.

This was the first time in eight years for the AMCHAM members to hold a meeting with Korea's labor minister.

AMCHAM Chairman James Kim appreciated that the Korean government has recognized the importance of inducing foreign direct investment (FDI) and shown that it values stakeholder input from the global business community. "AMCHAM stands ready to support the Korean government in creating the best business environment in Asia so that Korea could emerge as a regional business hub," he said.