[Live Interview - CNBC] Yellen says the U.S. and its allies should use ‘friend-shoring’ to give supp…

Yellen says the U.S. and its allies should use ‘friend-shoring’ to give supply chains a boost 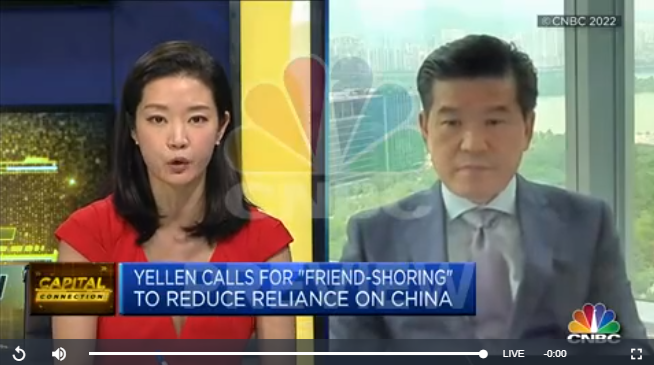 Capital Connection, CNBC - U.S. Treasury Secretary Janet Yellen has reiterated the need for the United States and its trusted trading partners to boost supply chain resilience through “friend-shoring,” but said this does not mean the U.S. is retreating from the rest of world.

In a speech made at South Korean conglomerate LG’s Science Park in Seoul on Tuesday, Yellen drummed up support from allies of the U.S. to work together in carving up more resilient supply chains among trusted partners through “friend-shoring.”

The term draws on the concepts of “onshoring” and “nearshoring,” which refer to the transferring of supply chains back home or closer to home, as opposed to having them in foreign countries. “Friend-shoring” goes beyond that but limits supply chain networks to allies and friendly countries.

The U.S. has been pushing for more security in its supply chains since the Covid pandemic started. U.S. President Joe Biden signed an order in early 2021 to review American supply chains with an aim to reduce reliance on foreign suppliers.

“Supply chain resilience is a key focus of the Biden-Harris administration. And the necessity of this work has been illustrated clearly by the events of the past two years, first by Covid-19 and our efforts to fight the pandemic and now by Russia’s brutal war of aggression in Ukraine,” Yellen said.

“Together they have redrawn the contours of global supply chains and trade.”  “Working with allies and partners through friend-shoring is an important element of strengthening economic resilience while sustaining the dynamism and productivity growth that comes with economic integration.”

Those initiatives, however, have prompted concerns of a possible global economic decoupling, particularly as the United States and other countries seek to avoid an overreliance on China.

Yellen said these measures do not indicate the U.S. is withdrawing from global trade. Rather, she said, they show that friendly countries are taking a longer-term perspective on vulnerabilities in an effort to make economies more productive.

“We do not want a retreat from the world, causing us to forgo the benefits it brings to the American people and the markets for businesses and exports,” Yellen said, in reference to deepening ties with South Korea.  “In doing so we can help to insulate both American and Korean households from the price increases and disruptions caused by geopolitical and economic risks …in that sense, we can continue to strengthen the international system we’ve all benefited from, while also protecting ourselves from the fragilities in global trade networks.”  Supply chain resilience dominated this leg of Yellen’s visit to Asia, which followed last week’s trip to Bali, Indonesia, for the Group of 20 meeting.

Other ventures that support supply chain resilience efforts include the recently announced Indo-Pacific Economic Framework, Yellen added.  With ‘friend-shoring,’ South Korea and the U.S. are in an ideal spot,” James Kim, chair of AmCham in South Korea, told CNBC’s “Capital Connection” on Tuesday.  “This is the most exciting phase I have seen in the past 18 years.”

Kim said while there were more direct South Korean investments in the United States than vice versa, American interests in the Asian country are growing. A recent survey by AMCHAM shows that for the first time, South Korea ranks as the second-most attractive location for regional headquarters in Asia, after Singapore, Kim said.