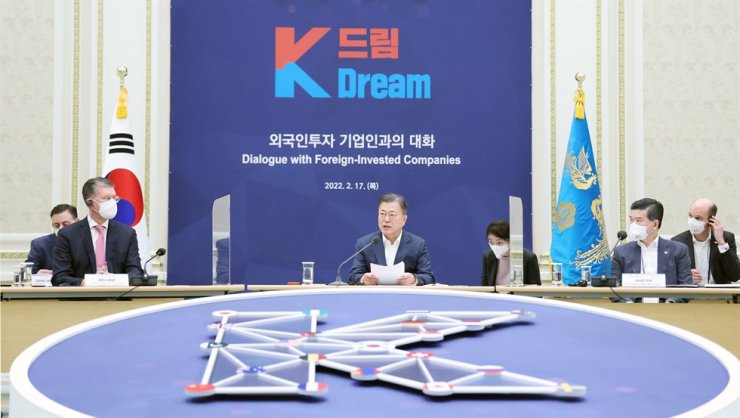 By Park Jae-hyuk, The Korea Times - President Moon Jae-in promised to offer tax incentives and subsidies to foreign companies in Korea that invest in the nation's strategic technologies, such as semiconductors, batteries and vaccines, and manufacture products contributing to carbon neutrality, Cheong Wa Dae said Thursday.

He made the remarks during a meeting with the heads of foreign-invested firms and foreign chambers of commerce in Korea. The event was held to applaud foreign-invested companies for a record $29.5 billion in investments last year and ask them to continue investing in Korea.

"Korea is a stable, sustainable and attractive country to make investments," Moon said.

The guests were representatives from foreign-invested companies involved in the semiconductor, vaccine, rechargeable battery, eco-friendly vehicle, chemical, IT, logistics, retail, tourism and financial sectors. Cheong Wa Dae is said to have reached out to them directly, instead of asking foreign chambers to choose which companies to attend.

The participants asked the government to simplify quarantine procedures upon arrival, although the President told them that Korea has ensured the stable movement of people and goods amid the pandemic, without any lockdown measures.

"Korea faced the least economic impact amid the COVID-19 pandemic and showed a rapid and strong recovery, solidifying its status as a stable investment destination," Moon said.

Minister of Trade, Industry and Energy Moon Sung-wook, who was among the top government officials participating in the meeting, expressed the government's willingness to pursue regulatory reforms for foreign-invested companies.

During the meeting, American Chamber of Commerce in Korea (AMCHAM) Chairman James Kim pointed out "two missions of importance." "One is to help make Korea a regional headquarters in Asia, especially given the geopolitical challenges. We firmly believe Korea is now well positioned to emerge as a regional business hub in the post-COVID era," the AMCHAM chairman said. "Our second mission is to help promote more small- and medium-sized enterprises from Korea and the U.S. do more business in our respective countries."

European Chamber of Commerce in Korea (ECCK) Chairman Dirk Lukat said that the organization hopes for the government's continued and constructive dialogue with the foreign business community for a prosperous Korean economy. "On behalf of ECCK members, we thank President Moon and the Korean government for their invitation to today's dialogue with foreign-invested companies," the ECCK chairman said.

This was the second time for the President to have a dialogue with foreign-invested companies during his term. The previous meeting was held in March 2019.