Korea advised to find opportunities amid challenging US trade policies 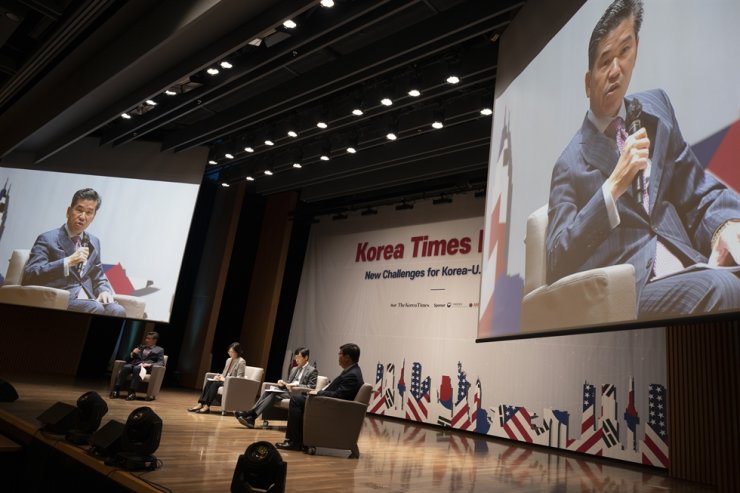 By Park Jae-hyuk, The Korea Times - Two international relations professors and a lawyer specializing in economic sanctions urged the Korean government and conglomerates here to upgrade their ties with U.S. partners, so as to maximize benefits from the recent U.S. trade policies that intend to revitalize the American manufacturing industry by restraining the growth of Chinese firms.

During the 2022 Korea Times Forum titled, "New Challenges for Korea-U.S. Alliance," Wednesday, the three panelists for the forum's first session on economic security agreed that the two countries' bilateral cooperation will make it possible for both of them to overcome difficulties stemming from the growing uncertainties in the global business environment.

In this regard, the participants shared the view that it is natural for Samsung Electronics, Hyundai Motor and various other Korean companies to make large-scale investments in the U.S. amid the recent supply chain disruptions.

"It is highly important to build a supply chain where there is a demand," said Lee Seung-joo, a professor in Chung-Ang University's Department of Political Science and International Relations, refuting the claim that the Korea-U.S. tech alliance only benefits the latter. "In terms of diversification, it may be a good strategy for Korean companies to invest in the U.S., not just in terms of cooperating with the U.S. government's reshoring policy."

Describing the semiconductor and automotive industries as "symbols" of the two countries' bilateral economic ties, Lee advised Korean firms to think about how to transform production cooperation into tech cooperation with the U.S., so that they can tap into the world's most innovative technological ecosystem.

Shin Tong-chan, a partner attorney at one of the nation's major law firms, Yulchon, also saw that both Korean and U.S. industries will benefit from Korean firms' investments in the American market. "Samsung Electronics and Hyundai Motor are already global companies investing in various parts of the world," the lawyer said. "They have heavily relied on supply chains in the overseas market. Due to the tensions between China and the U.S., however, Korean companies cannot rely on the Chinese market or production facilities anymore." From that standpoint, he said it has become inevitable for Korean companies to accept the U.S. request for friend-shoring, the strategy of building supply chains excluding unfriendly nations.

Lee Hyo-young, an assistant professor of international economy, trade and development studies at the government-run Institute of Foreign Affairs and National Security (IFANS), also regarded Korean firms' investments in the U.S. market as natural. However, she attributed their decisions mainly to the U.S. government's higher import barriers. "We need to consider that the hollowing out problem can occur in Korea because only large companies can afford those kinds of large investments in the U.S., while the rest of Korean companies cannot afford to do that," she said. "There can be many ways to enhance the technology alliance between the two countries, not only by inducing more investments in the U.S. but also by engaging in more R&D cooperation."

The Yulchon partner admitted that Korean companies will suffer difficulties at least in the short term, although he expects the relocation of their production facilities to the U.S. from China to enable them to benefit from the new U.S. law in the medium to long term.

The Chung-Ang University professor urged the Korean government to continue to make efforts to convince the U.S. government and Congress to grant exceptions to Korean companies. "It is highly important for the Korean government to coordinate with other countries with similar concerns. Korea should not seek its own interests in a very exclusive manner," he said. "Korea should also weigh carefully the benefits and costs of the IRA."

The IFANS professor said that artificially trying to make everything in the U.S. is not a very good strategy from a business perspective. "I hope that the two governments will be able to work it out," she said, adding that the Indo-Pacific Economic Framework for Prosperity (IPEF) could help coordinate Korea's strategic position.

Lee from the IFANS also emphasized that what happens with the IRA will decide whether or not Korea will participate in the Chip 4 alliance along with the U.S., Japan and Taiwan.

The two other panelists called for Samsung Electronics to seek international cooperation in order to manage its competition with TSMC in the global semiconductor foundry market, which has intensified as a result of recent U.S. support for the Taiwanese chipmaker amid the lingering trade war between Washington and Beijing.

While Lee from Chung-Ang University recognized TSMC for its rapid expansion in the U.S., Japan and Germany to deal with the geopolitical risks, Shin from Yulchon pointed out that Samsung Electronics lacks board members of foreign nationality, unlike TSMC, which has four board members from the U.S. and Europe.

Regarding the labor shortage in Korea's semiconductor industry, the IFANS professor advised the government to upgrade its plans to nurture semiconductor experts, so as to prevent them from moving to other countries.

The Yulchon partner urged the government to lift unreasonable regulations and give more autonomy to universities. The Chung-Ang University professor called for balanced and integrated approaches, while asking businesses to rethink their in-house training programs.

The AMCHAM Chairman & CEO suggested that the Korean government lower its regulatory hurdles, so that the nation's businesses can also look for talented foreign professionals and hire the best employees for them.

During the panel discussion, the participants also talked about the potential impact of the Russia-Ukraine conflict on the Korean economy.

"Due to the exposure of South Korean companies to the Russian energy market, many South Korean companies will face difficulties in going through this situation," Shin said. "On the other hand, Korea has been actively involved in fixing supply chain disruptions as well as providing assistance to humanitarian aid and to the defense industries in (Ukraine's) neighboring NATO countries like Poland, so in my view, it is a challenge but also an opportunity."

Chung-Ang University's Lee anticipated that the war would have a limited impact on the Korean economy, given the country's trade volume with Ukraine and Russia. However, he warned of energy price hikes and supply chain disruptions.

"Ukraine has some key materials required to produce semiconductors, such as neon gas," he said. "In collaboration with the U.S. government, the Korean government should keep track of any signs of instability in the supply chain."

The IFANS professor expressed concerns about the possibility of the geopolitical risk having a negative impact on supply chain resiliency and eventually cutting up supply chains into blocs based on different values and systems.